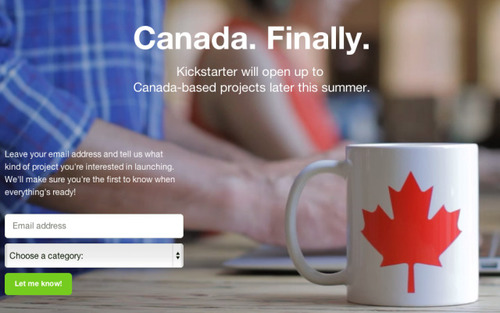 Kickstarter just announced via its Twitter account that it will be opening up its crowdfunding platform for Canada-based projects as of “later this summer.” Thus far, that’s as specific as the company is getting, but anyone interested in finding out more can sign up at Kickstarter’s Canada launch page with their email and project category of interest to get an alert when things go live.

Tales of humour, whimsy and courgettes

Do your Duty and Research. Do NOT be a Victim

travel, learn , have fun, explore and be happy

For Readers and Writers

Just a small town girl who writes about Christian stuff.

Help Change The World. The Future Of The County Is Now.

INTERNATIONAL GLOBAL PARTNERSHIPS - "Reform begins from the grounds up."